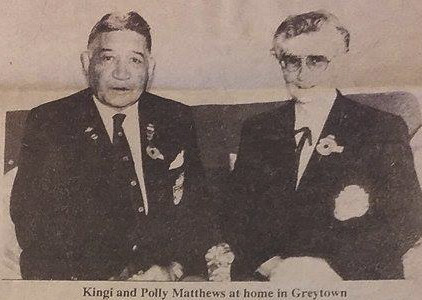 Kingi Matthews with his wife Polly.  This photo is from an article in the publication 'Looking South'. The following are extracts from the article:

When Kingi returned home after secretly enlisting, he stood in front of his father Joseph (a WW1 veteran) in full uniform and told him he was going to war. Joseph said to him “Now that you’re wearing the King’s uniform I can’t take it off you… By the way your garters are inside out.” Before he embarked he was farewelled in the Wairarapa by family and friends and received blessings from both sets of grandparents. His parents saw him off, it was emotional. On the journey he suffered from sea sickness.

At camp in Egypt, Kingi, a promising rugby player, was selected for the base rugby team. He was trained by Padre Wanoa, himself a former Maori All Black. In Egypt, Kingi was part of a team that played in an exhibition match against world class players.

Kingi arrived at the battlefront in Forli, just before Christmas in 1944. He recounts: “The first time we heard a shell go off we all jumped into the ditches beside the road. It probably landed about five miles away. When we finally stuck our heads back up the old hand who was leading us was laughing. He told us we would be all right as soon as we learned to judge how close they were coming.”

The winter in Italy was horrible. “We were wet for weeks on end and the fighting was non-stop.”

“During some attacks you didn’t have the chance to look out for your mates till it was all over. Everything happened so fast. When it ended you turned around to see who had been hit.”

Kingi remembers a particular time when he was almost hit. “There was shrapnel whizzing about all over the place and I stood up from lying down over my Bren gun an instant before a big chunk hit the gun barrel and folded it in half.”

Kingi says “Being in the Battalion was like being in an extended family. You got looked after.”

Kingi was part of the final push from the Senio River to Trieste. He describes “We sat on our kitbags by the river watching the aerial bombardment. The padre came and blessed us, we had a nug of rum, ‘rooster’s blood’, then we got stuck in.”

Kingi and his wife Polly were heavily involved in the 28th Maori Battalion Association. He attended and marched in many dawn parades after the war.