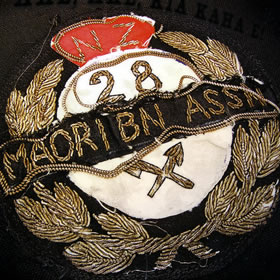 Christmas Day 1942: Lieutenant-Colonel Charles Bennett, Te Arawa, recounts the Battalion's preparation for the day, the fortuitous arrival of Christmas food supplies and mail but, alas, no tītī or muttonbirds. They had fallen into enemy hands. This provoked a wry comment from the German forces! The track ends with the Battalion singing Tapu te pō (Silent night, holy night).

Ever since Alamein we had been more or less in constant touch with the enemy.  I had the honour to command the Māori Battalion.  On Christmas eve I pondered about tomorrow. Christmas day was a sacred day.  I decided if its sanctity were to be violated it would not be by the Māori Battalion. I therefore told my troops that in circumstance were shots to be fired except in self defence. I felt sure that the Germans would rationalise things in the same way.  We all expected a cheerless kind of Christmas, deep in enemy territory, far from supply bases and after all in war ammunition and petrol are more important than special tucker for Christmas.  We expected the usual hard rations of the last two months, bully beef and dog biscuits.  But like a miracle things began to happen, vehicle after vehicle arrived with special supplies.  By Christmas day we had such luxuries as fresh pork, potatoes, tin fruits, cigarettes and General Montgomery's promised one bottle of beer for every man.  But alas, a special consignment of muttonbirds from our kinsfolk back home fell into German hands.  The Germans from then on derided the Kiwis as uncivilised consumers of salted seagulls.

On Christmas day we held an early church parade and away in the distance we could see a concentration of German troops.  They too were probably having their own church service on this holy day.  Preparing Christmas dinner was underway when we struck a problem how to make a hangi without rounded stones and wood to heat them.  These things just didn't exist in the desert.  Some bright spark however pointed out where there's a beach there's bound to be stones and driftwood.  The Mediterranean coastline was only about 10 miles to the North of us, so why not send trucks up to carry out a reconnaissance.  We did.  Cruising off through enemy territory, hand collected not only stones and driftwood but four German prisoners as well.  Surprised and captured while bathing in the nude in the cool Mediterranean waters. Needless to say we made them stay to share our Christmas dinner with us.

For pūhā or raureki our foragers gathered up some kind of a weed in one of the moist waddies close by.  Plant life in the desert is rare.  This stuff smelt like nothing on earth, but into the boiling pots this desert greenery went, stalks and all. Incredibly nobody suffered afterwards.  Around 1 o'clock the hangis were uncovered and there at Nephilia, thousands of miles from our homes and from our civilisation we sat down in the desert sun to one of the most sumptuous and memorable Christmas celebrations I have ever shared in.  At least for that one day there was peace and content amongst friend and foe alike.