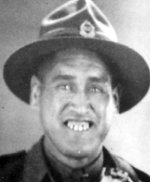 Matehaere Huriwai bids farewell.  Matehaere, also known as Paenoa, was from Tikitiki on the East Coast.  He served with C Company and embarked with the Main Body.

This very short recording was made after the official farewell ceremony to volunteers from the Tairawhiti region at Gisborne on 27 March 1940. At that point the men were  boarding their buses.

(Site administrator's note: there is a lot of static throughout the audio).