The Māori Battalion and other New Zealand troops were to spend the last two years of the war in Italy. Gone was the arid, sparsely populated desert, well suited to tank battles and mobile warfare. Instead, the Māori troops would encounter mud and snow, mountains and rivers, a deeply entrenched enemy - and the warm-hearted Italian people.

The Māori Battalion arrived in Italy in October 1943. The Italians had surrendered to the Allies the previous month, but the country was now occupied by the Germans, who would resist staunchly until May 1945. With Lieutenant-Colonel Keiha having been hospitalised and then sent home on furlough, the Battalion was again commanded by a Pākehā officer, Lt-Col Monty Fairbrother.

The change from Egypt was dramatic, as a cold and wet winter closed in. The Māori Battalion returned to action at Orsogna on 7 December 1943. Some gains were made in bitter hand-to-hand fighting, but at Christmas the town remained in German hands. The New Zealanders were withdrawn from the front line in mid January 1944, by which time Fairbrother had been succeeded by another Pākehā, Major Russell Young. Of all the battles involving the Māori Battalion in the Second World War, none was more brutal or costly than the struggle for Cassino in early 1944. The towering 500-m Monte Cassino, topped by a Benedictine monastery, dominated the route to Rome through the Liri Valley. Below it lay the Rapido River and the heavily defended town of Cassino. Several Allied attacks had failed before the New Zealanders arrived.

On the night of 17/18 February 1944 the Māori Battalion attacked the town's railway station, but when supporting tanks were unable to get through they were forced to withdraw under heavy fire. A and B Companies suffered terrible losses, with 128 out of 200 men killed, wounded or captured. After another unsuccessful attack in March, which saw desperate close-range fighting in the ruins of the town, the New Zealanders were withdrawn in early April. Cassino eventually fell to Polish troops in mid May 1944. 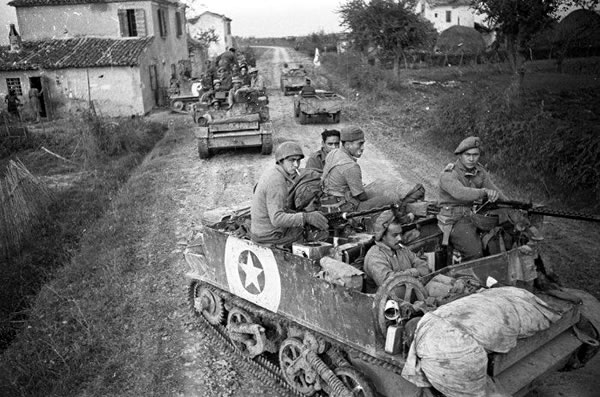 After rest and recuperation, the NZ Division returned to the front line in July 1944. The Māori Battalion was again to the fore in the advance on Florence, being the first unit to reach the outskirts of the city on 4 August. There were further actions near Rimini in September and Faenza in December, but progress slowed as winter closed in. From November 1944 the Battalion was again under Māori command, with Lt-Col Arapeta Awatere in charge.

It was April 1945 before the Battalion returned to the front. The last month of the war turned into a pursuit, with the New Zealanders crossing the Senio, Saterno, Sillaro, Idice and Po Rivers virtually unopposed. German forces in Italy capitulated on 2 May 1945. The war ended with the New Zealand Division in Trieste, near the border with present-day Slovenia. There they faced a tense standoff with an allied force, Tito's Yugoslav partisans, who had hoped to occupy the city and incorporate it into Yugoslavia after the war.

For the Māori Battalion, the Italian campaign had cost the lives of 230 men, with 887 wounded.

Although the war in Europe was over, shipping shortages meant it would take more than seven months to bring the whole Māori Battalion home. In May and June 1945 111 men from the 6th and 7th Reinforcements returned to New Zealand (by that time almost all the surviving men of the 1st, 2nd and 3rd Echelons and the 4th and 5th Reinforcements had already been sent home and replaced by new recruits). Lt-Col Awatere was among those who returned in June; Major James Hēnare became the Māori Battalion's last commander.

In July 1945, with the Trieste dispute now resolved, the NZ Division moved to Lake Trasimene in central Italy. Rumours that the Battalion would be sent to fight in the Pacific ended with Japan's surrender on 15 August. In September a guard of honour visited Crete to attend memorial services honouring Māori soldiers buried there; similar ceremonies were held at Italian war cemeteries.

Apart from 270 recent reinforcements who volunteered to serve with New Zealand's post-war occupation force in Japan, the remainder of the Māori Battalion would return to New Zealand as a single unit. They left Taranto aboard the Dominion Monarch on Boxing Day 1945, bound for home.