Site note: Whānau advise that rank at end of war was Major.

This article appeared in the April 1986 The Battalion Remembers II booklet.

George Tuoro Marsden died November 2, 1984. He was born at Waimate North, August 28, 1918. His father was the Anglican minister there. The family later moved to Awanui where George grew up. He attended both Wesley and Te Aute Colleges and then Auckland Teachers College. He was a trained teacher when he entered Papakura Military Camp with the 5th Reinforcements in January 1941.

There he was selected to train as an NCO and then as an officer at Trentham. He was commissioned in June 1941 and returned to Papakura to help train and then sail with the 7th Reinforcements.

As for many of the 7th George Marsden's first action was at Miniqar Qaim. Shortly after the breakthrough at Alamein he was severely wounded and did not return to the Battalion until after a spell in hospital, and a long and eventful posting as Liaison Officer with 5th Brigade HQ.

After hostilities had finished George returned home. He had met Sister Pare Saxby at No. 3 Hospital in Bari and that meeting soon terminated his bachelorhood. The Marsdens set up house on a number of glebes and college campus - Maori Primary Schools and then Te Aute College, St Stephens School and Gisborne Boys High. While on the St Stephens staff he started part-time study for a BA degree which he completed while teaching at Gisborne Boys.

George's last professional position before he retired in 1982 was 10 years at Hamilton Teachers College where he specialised in education - Maori particularly.

Those of us who knew George over the last 45 years knew him to be a man of many parts, a leader in all manner of undertakings that had to do with the betterment of youth. Coaching the 1st XV at Te Aute and again at Gisborne Boys, a selector for the Maori All Blacks, member of the Maori Rugby Advisory Board, the Prison Parole Board, the Maori Education Foundation, the National Advisory Committee on Maori Education and a host of other important organisations. To all these decision making bodies George brought a measure of authority and humour and fluency of language (both Maori and English) seldom surpassed by others of our generation.

George was a Justice of the Peace and in 1980 his services to Maori Education were officially recognised by the award of the OBE.

No family who ever served with the Maori Battalion could muster more than six brothers as the Marsdens did and Major George was their star. In all the circles in which he moved George is sadly missed and we shall mourn his passing and commiserate with Pare and her children - John, Peter, Elizabeth and Ronald. 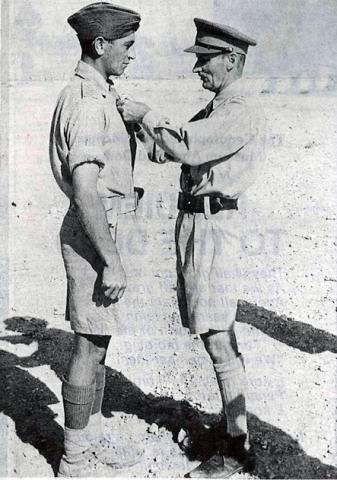