We will remember them

Taka enlisted at Thames on 15 March 1940 and entered camp with the 28 Maori Battalion at Papakura and Ngaruawahaia. He embarked in November and disembarked in Egypt on 12 December 1940. By the end of March 1941 he was in Greece facing the might of the German Army. He said that  everyone was a little scared and nervous in anticpation especially the young ones who pined after their mothers. Anyway the Germans advanced and as a result most of the 28 Maori Bn was shipped over to Crete.

Taka siad that they were continually softened up by the German Planes and especially the Stuka which he said gave out a horrible scream as the dive bombed. On the 20th May they expected an invasion from the sea but he remembers the colourful parachutists falling from the sky. The next 2 days they shot at and hunted the Germans with success. He recalls that they had to recover the dead paratroopers food rations such as buscuits, bacon and also cameras, binoculars and other goodies. There were also white capsules that they tried - he said they gave you a high like dope. They called it snow. He confirmed the use of the haks and bayonet charges and even the Pakeha participated. On the 23 May 1941 he can remember diving behing a stone wall in an Olive Grove as they were being shot at. When he gathered himself he felt this hot liquid over him and saw he was shot in the arm. His mates were able to get him back to the Field hospital. After being tended to he and other wounded started their walk with Medico Mules over the hills to be evacuated to Egypt. He said someone stole his boots so he had to wrap his feet in cloth and walk over the hills to evacuation to Egypt by ship. He did not tell me what happened at the place of departure.

When Dad was wounded at Galatos on Crete on 23 May 1941, our Grandfather wasnt told until 12 June 1941. He spent time in Alexandria hospital in Egypt, and on returning to NZ in August 1941, at Wellington hospital, and was taken by ambulance from the express train  in Hamilton back to Thames hospital where the bullet was removed from his upper arm. After recuperating and retraining he embarked on 31 March 1941 for Italy.

He says a lot of the young men from Thames Charles Kipa and Bill Connor also joined the 28 Maori Bn in Italy. Dad said he had to look after the younger ones and would instruct his brother Hone Papahia (Jack) Robson to give them  extra bit of kai at meal times. He remembers the bombardment of Casino and the attack on Casino Railway. They returned to NZ and were discharged in April 1946. Anothet brother Pita Riwai Robson was also over seas at the same tome and reached the rank of Captain.

I worked for NZR in the BOP in the 1970's and 80's and Dad told me to look up his old 28 Maori Bn B Coy mates Ted Murray, Charlie Apihai and Harry Reneti which I did. I was working in Kawerau and was at the Edgecumbe pub with some of the railay track staff. One of the Bridge carpenters Wally (Golly) Ihaia on finding out my name asked me who my father was. I said Taka and he said "I'm going to take you outside and give you a hiding". My dad was an older and bigger man and the WO II who meted out the discipline to the young mischevious soldiers. He wouldnt get them to run around the block, he would take them out of sight and beat them up. Anyway I became good friends of Wally Ihaia and Laurie Raureti and I took dad to meet them when we passed through Kawerau.

My wife Pearl has interests in a Maori land block near Waihi called Mataora which was gifted to Ngati Porou to utilise for harvesting produce to Tamaki markets in the 1850's. Every Xmas we camped down there spending time surf casting.One day two of us were anticipating fish bites when Henry said my father was Anaia Amohau. I looked at him and said Ive got a photo of his and my father standing together and we look the same (except dad was 5 inches taller). Attached is the photo of the Seargents Major at Ohinemutu in 1944.

Dad said at one stage they were ordered to take no prisoners. He said the only time no prisoners were taken was if these same prisoners had just killed one of theirs. What he saw mainly was that the soldiers would take all their food and possessions off them then let them go.

My dad's brother Hone Jack Robson apparently helped run a brothel in Cairo. The boys said that it cost 2/6 so they would get a penny and dip it in some quick silver/mercury or try and cover the penny with silver paper. Hone (Jack) was also a cook and my dad said that if they were attcked by planes he would ensure all the pots of food were hidden in the trenches. 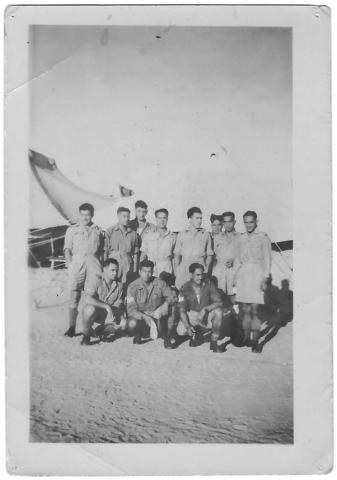